Christopher Garcia has been an Adjustment Counselor at New Bedford High School for 18 years. In that time, he has served and worked with thousands of students and hundreds of educators. He has held many positions and roles in the NBEA. He’s served as First Vice-President and also as Grievance Chairperson. He has successfully settled dozens of grievances for both Unit A and B members, including disciplinary and evaluation matters, both for individuals, and as class actions.

He has been Chairperson of many Contract Negotiating teams, for individual schools, and also for both the Unit A and Unit B general contracts. He has served on the Executive Board of the NBEA. and also as a building representative at NBHS for 15 years.

Chris is active in the local community and continues to be a vocal proponent for public schools, educators, and the students of New Bedford. 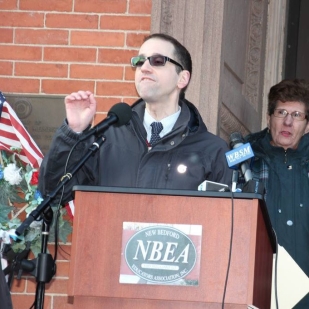 Chuck Lapre has earned four Massachusetts Professional Educator’s Licenses and is in his eleventh year of teaching Grade 8 Social Studies at Roosevelt Middle School. During his thirty year career in education, Chuck has held a variety of positions.  While working for the Fairhaven Public Schools, he served as a social studies teacher at the Hastings Middle School and the Lead Teacher/Coordinator of the At-Risk Program at Fairhaven High School.  Chuck was also a radio host and news anchor/reporter in the New Bedford and Providence markets.  He occasionally hosts public events, including some of the activities sponsored by the NBEA.